Yom HaShoah has passed, yet discussions continue as to the importance of keeping the Holocaust “present” in memory and psyche.  Having immersed myself in studying the events leading up to and through one of the acknowledged crimes of any century, I have come to learn several things that bear repeating.

One piece of information came from Dr. James Miller from Keene State College, an extraordinary presenter in the Holocaust and Genocide Lecture Series at Sonoma State University.  Dr. Miller actually conducts week-long training sessions with diplomats and military leaders at Auschwitz to empower their greater understanding of the nature of genocide.  It is hoped that as “boots on the ground” they can identify early warnings of hostilities toward groups of people before they erupt into full-fledged genocide.

Dr. Miller shared studies as to how it was possible for such evil to exist and be visited upon innocents both during the Holocaust and other 20th century genocides (Armenia, Cambodia, and Rwanda, to name a few.)  It was chilling to learn that the Nazis were not unusual in their makeup and are not believed to have been born inherently evil (a nation of “bad seeds” so to speak).  While The Third Reich’s leadership set into motion the unfathomable murder of millions, the lower-level functionaries who carried out their heinous crimes were average individuals . . . the butcher, the baker, the candlestick maker . . . the doctor the lawyer, the housewife . . . the teacher, the merchant, the laborer.  Individuals like any other.  Individuals.  No different than you or me. 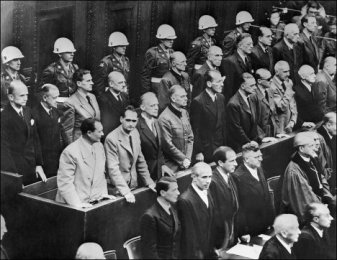 For me, that information makes Yom HaShoah even more compelling.  Once a year we not only commemorate the systematic destruction of human life, and set in our hearts the memories of those who perished — but engage in self-examination.  If “regular people” perpetuated such horrors upon others, what might WE have done had we been given such orders?  Would we have followed along without question?  If so, how might we have justified our actions against the moral compass that steers our lives?  What would have made it feel “right” to murder innocents?

Moral dilemmas on both sides of the equation.  And now, as the numbers of Holocaust Survivors dwindle due to the passing years, efforts to record their memories and keep alive their stories has escalated.  Escalated, for as memories of the Holocaust fade, the potential for it being repeated grows stronger.  Many years ago, when I visited Jerusalem’s Yad v’Shem Museum, the words, “LEST WE FORGET” were emblazoned upon a large sign at the entry.  Those words stood as a reminder to all human beings that lessons not learned, or forgotten are doomed to be repeated.

There is a distinct challenge in writing a fictionalized version about real events that happened to real people in real places so many years after the fact.  Those who experienced WWII directly, or the generation that followed is not the experience of young people now in school, let alone future generations.  It is disturbing to realize that a growing number of people are unaware of the Holocaust.  Taking it a step further, many have also never heard of Rwanda’s genocide, notwithstanding the news coverage that marked the gruesome events of 1994 — just 18 years ago.

As a society, we are exposed to images of violence and brutality daily – in the news, online, in video games, television and film.  Such distancing from the Holocaust and equally disconcerting, the desensitization of our young people, is a breeding ground for future genocides.

Genocide is dependent upon various things falling handily into place:

If people, young or old, are unfamiliar with what happened both during the Holocaust, and other instances of genocide around the world — it is the responsibility of a sane, compassionate and humane society to inform them.  If such examples seem too distant, ask if they’ve ever experienced, or witnessed bullying, bigotry, or racism.  EMPATHY is key.  If the human race is to retain its humanity, we must see ourselves as part of a larger family of mankind – OUR family – which must be protected and respected by everyone if we are to survive as a species.